Hiya, just felt like adding to my blog for once to just have a mumble on about various things. I’m currently all-set to get married on the 22nd of this month (super excited about that shit too, by the way), but that means I’ll be taking a short (and this time I really do mean short) break from updating Peelopaalu with new links for the next week or so. I’m aiming to get back to regular updates, but with the wedding coming up in less than a week(!) I figured I owe it to myself to take a bit of time to unwind and just enjoy some of the small shit for a little bit and spend some much needed one on one time with my other half before we tie the knot.

So, what am I up to outside of wedding plans at the moment? Good question. Outside of work? Not much right now. Playing a shit load of SSX3 on the PS2 has eaten a good chunk of my spare time as of late. For those of you who don’t know, I’m a massive cheapskate and I found a copy in CEX (a sort of electronics pawn shop here in the UK) for 3 pounds before the lockdown and promptly said “fuck that” and figured I’d hold out for a cheaper copy, and that day finally came earlier this week! I found a copy for absolutely bugger-all recently (srsly, like less than 1 pound bugger-all) because the box was smashed to high hell and back and the sleeve was torn up a bit. Not really an issue for me considering I have a stack of spare boxes that I was given by someone who found them in their garage without games a few years ago. One new box later, and hey, it looks bredi alright/10. Sadly though, my PS2 controller is completely fucked. I got it along with the aforementioned games, and holy shit someone suffered from serious FIFA rage back in the day. This thing is absolutely rat-assed. The controller shell is misaligned, one of the screw posts is smashed off and was rattling around the controller until I dismantled it and removed it, the L1 gets jammed occasionally, L2 is missing stabilisers so it wobbles a bit, the ferrite bead is loose and slides up and down the controller cable (how the fuck did this happen?), this thing is just a fucking mess and is bordering on unusable which has led me to deciding to just grab myself a brand new, never used, mint and genuine PS2 dualshock 2 controller so I don’t have to deal with buying a lemon on eBay. Maybe the old one can make a good “player 2” controller for when people come over or something, but its days as my main controller are numbered. Maybe I’ll unbox the new one when it arrives or something and post a video on my YouTube channel.

Here's some random images of the stuff I just rambled on about. Click any of them for a larger image hosted on Imgur. 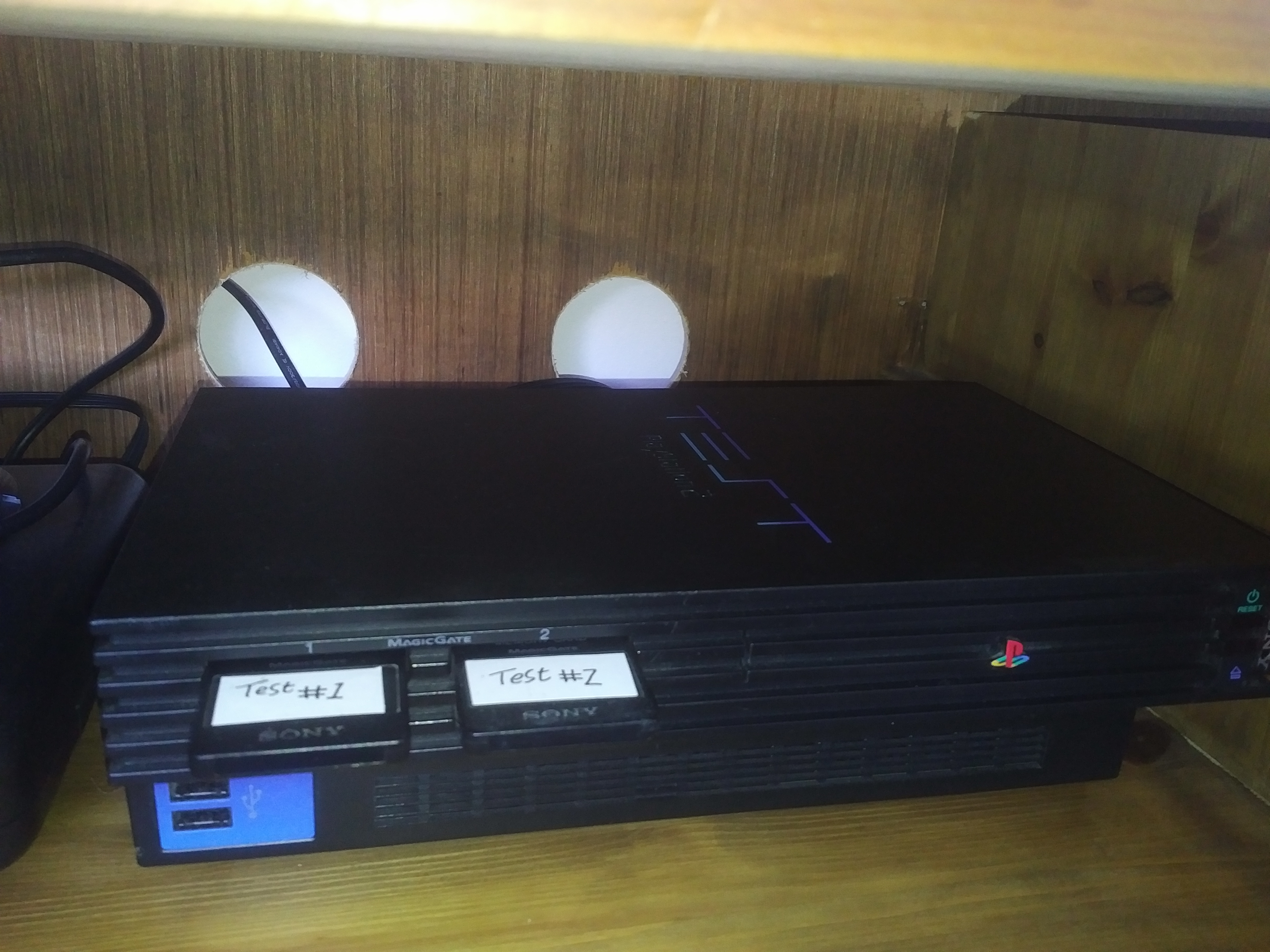 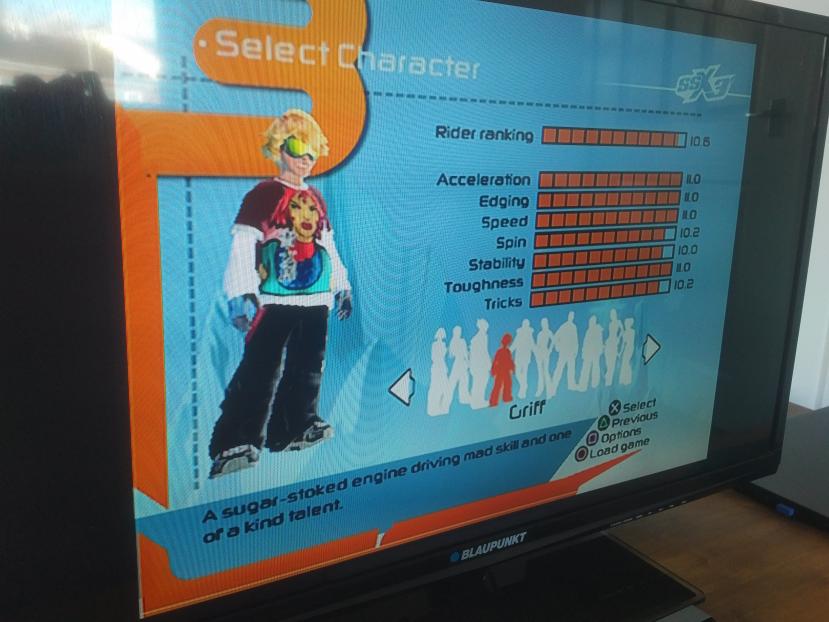 Spent the last few days playing this so much that I’ve almost fully maxed out Griff. 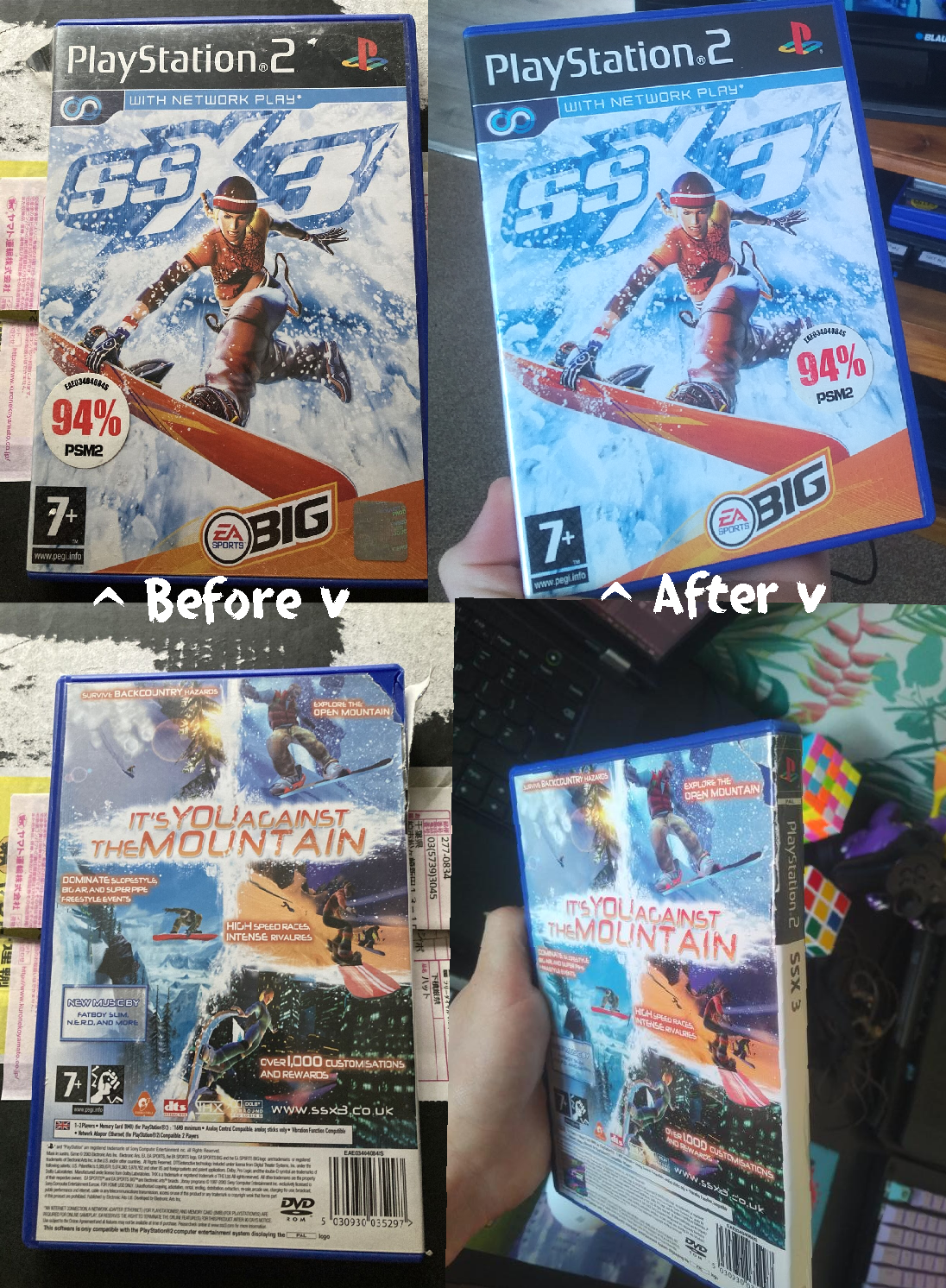 SSX3 before and after. Never going to be a mint collectors copy or whatever, but who gives a shit about that? 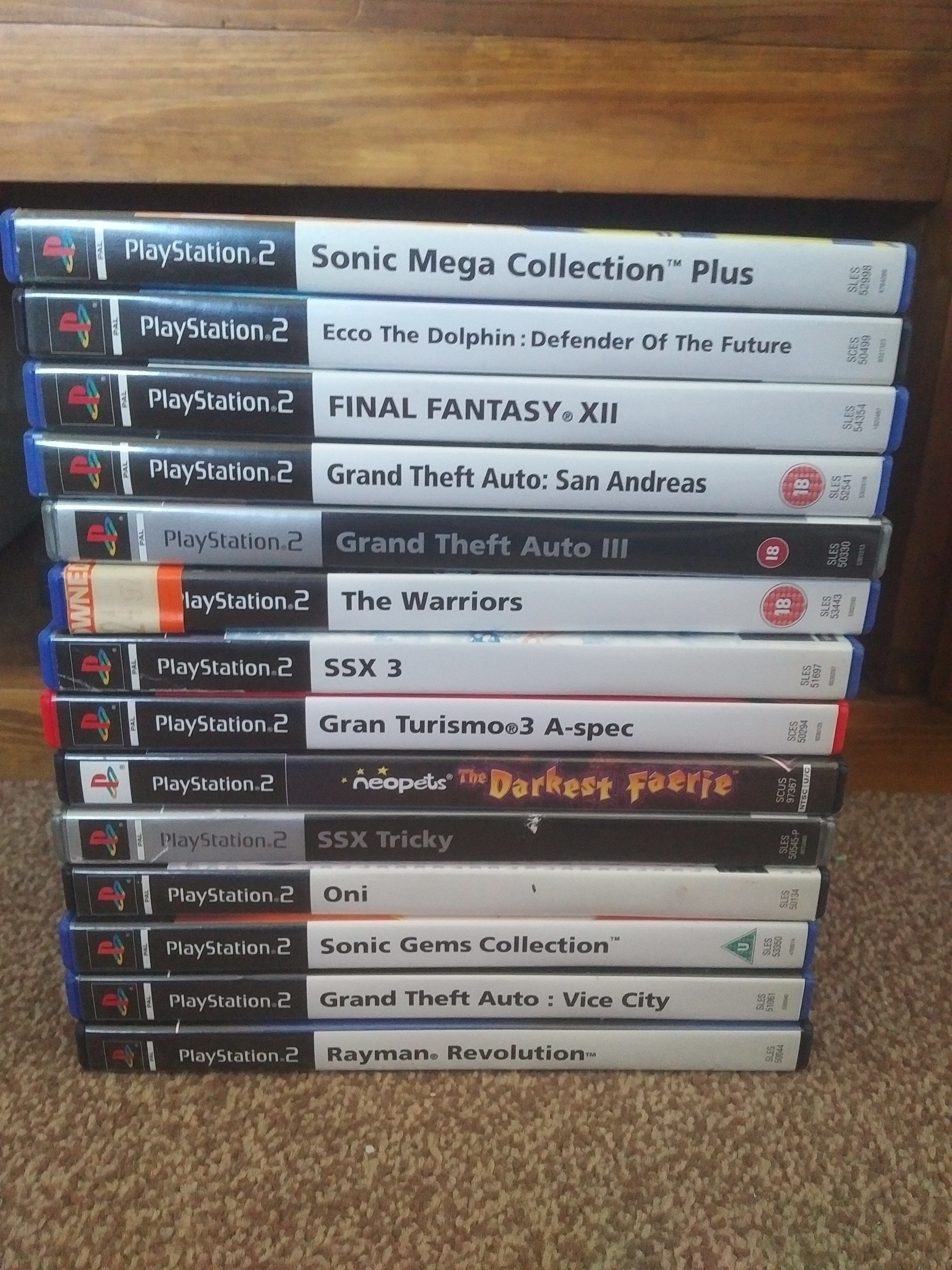 Current game collection - I only buy stuff I like, so a lot of this stuff probably isn't of any great interest to anyone but me and my partner (Neopets is hers)

Nothing much else to share right now other than that I am working on a Peelopaalu update that I plan to push out after getting married and getting a few other bits and pieces in order. I reckon you’re probably going to like this one too – I’ve put a fair bit of effort into trying to make it nice and varied so hopefully you get a kick out of it. Oh, and to mark the upcoming 1,000th website on the directory, I decided it was about time I got a sticker made to slap onto my laptop and guess what? I have extras. Not by choice, but by the very nature of how custom sticker printing companies operate and I figured why not cast a line out there and see if any of you guys want one? I’m still currently waiting on them to show up, but they’re nice-ass high quality shiny die-cut stickers that hold up really well to the elements and whatever else you want to throw at them (I’ve used this company before and their stuff is pretty great), expect me to post pics of them to the listing (hopefully) soon on the Support the Site page of Peelopaalu. I’m thinking $7.00 (USD) + postage is a good price for them, but I dunno. I’m basing this off of what other small sticker shops charge for their designs, so if you think another number is more appropriate then let me know! I’m happy to send them anywhere in the world if you want to grab one, but make sure you let me know ASAP because there are only going to be between 5 – 8 of them available as I haven’t decided how many of them I want to use myself yet.

Until next time, this’ll be it from me for the time being! Speak to you dudes after I’m married!

Whew! Took me a while, but I'm back at it again with the blogposts. I've had a few cans of Fosters and I've decided it's about time I actually started updating this page again. It's only been what? Uhh... Three months since I last blogged.. Oops! I have been busy with my other thing over at Peelopaalu though, so I do have a semi-valid excuse!

Anyway, what's changed since I last had a massive rant in my blog? A lot, actually. Peelopaalu got a complete makeover and I fixed some massive issues with the site that were driving me batshit insane, I finally decided to redesign this site for the 4th(?) time now, oh, and I'm getting fucking married in two weeks. Yeah. Almost forgot about that one. I should probably break these things down one at a time though, so here goes.

So, it's been annoying me for the last few months how Peelopaalu's pagination system works. Yeah, I know months ago I said I wanted to keep it as long as possible but I quickly realised when I broke the 500 links mark that this shit just wasn't going to be sustainable in the long term. I tried for the longest time to justify not splitting the directory into pages, but it just became so ridiculously unbearable to browse without losing where you last left off that I had to do something about it. Originally, I split the whole thing up into pages of 600, but that wasn't enough, so I decided to just break it apart into pages of 250 at a time and now the site is considerably much more pleasant and easy to just scroll through and keep track of what you're actually visiting without it turning into a complete cluster-fuck. I apologise profusely for not doing this sooner. My bad.

I also decided to address what I saw as the biggest problem with Peelopaalu: The site layout. Don't get me wrong, I liked how the site was well.. Laid out. I just didn't like the colours all that much anymore. Pure black kinda destroys your eyes after a while, and the blue+black with fast scrolling just about gave me motion sickness when scrolling so I decided to switch it up a bit. I first swapped to a God-awful green+black theme, experienced exactly the same issue as the blue+black scheme, and then decided to stop being a lazy bastard and actually fix it properly by going back to the drawing board altogether and working out a theme that both looks (I think) nice and is also (again, I think) really easy on the eyes, which has resulted in this nice muted grey and lighter blue (so we're still sticking with the OG theme!) scheme which I feel suits the site incredibly well. If you want to give feedback on the new theme, you're more than welcome to email me by clicking the button in my site navigator - I'm more than happy to consider tweaking it again if you have a suggestion or whatever!

The theme changed to match Peelopaalu's and I also tried way too hard while making that little pixel tower in the header. I know it's not perfect pixel-art or anything, but I tried my best on it and I'm kinda proud of it for what it is. I'm gonna miss the koala I used to have in my logo, though.

So, here's the stuff I'm most excited about: I'm getting married! Yeah! Really! Back on the 8th of this month, my partner and I went to our local town hall to give notice of marriage and with her being an Australian citizen and not a British citizen, we were told to expect everything to take around 72 days before we even hear back about the possibility of getting married. Not great, but we accepted it and decided to go ahead and just wait it out. Here we are less than a month later though, and boom, into my inbox pops an email from the Home Office telling us "yeah, go ahead and get married, whatever man" so we decided "fuck it, we've waited long enough" and immediately booked our day in for the 22nd of April. This is great for multiple reasons: First one being that it means after more than a Goddamn year of trying, we're finally able to get married and spend the rest of our lives together, second one being that it means we can get married AND have enough time to sort our impending next lot of visa bullshit out, and thirdly, it means we have plenty of time to get our savings back up before the year is out after getting married and dealing with all of our visa crap! It's almost like things are looking up or something! Who'dda thunk it? Expect another update in this regard after I've actually gotten married. I may or may not end up writing a blogpost talking about it. Stay tuned.

Anyway, that's all I really have to share for now. Sorry for the slightly unorganised and rant-like nature of my posts on this site. I try to keep Peelopaalu as clean and "to the point" as possible, but I kinda like to use this page as a place where I can let my hair down or whatever and just vent about shit whenever I feel like it.

Hope you're all doing well out there and staying safe in these weird fucking times. Feel free to drop me an email if you want to ask me anything about my site, about my blog, or if you just want to shoot the shit and chat. I'm always glad to hear from people.

Didn't really feel like including my old blog-posts in the new site design. I do plan on dumping them on Pastebin sometime in the future though, so if you're interested in reading them for some reason, keep your eyes peeled!